The origins of Astrology

Astrology is ancient. Several thousand years old, it originated in Mesopotamia and India.  The ancient Greeks, the Hellenes, Romans and the later Muslim civilisations developed the art of astrology and cosmology further.  It was via astrologers working in the Muslim empires, such as in Andalucia (Spain), that astrology came back into Europe during the early Renaissance.  In the west, astrology went into decline from about the late 17th century, during the Age of Enlightenment.  It revived again, in popularity, during the turn of the 19th and 20th centuries.

How does astrology work?

Astrology looks at the cycles of the Sun, Moon and planets in relation to human affairs. It can be used to understand ourselves and others; to help make the most of our potential at any time; and to gain a unique insight into not only our personal lives, but also into global and political events. 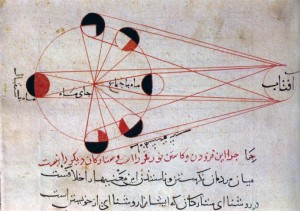 An Arab diagram of an eclipse.

Horoscopes in the media and the real art

For many, an introduction to astrology is the daily or monthly horoscope column in newspapers, magazines and on social media.  These represent the entertainment side of astrology.  Some writers of horoscope columns are self-taught, while others are  qualified astrologers from recognised schools.  Unfortunately, others are not.  The ones who know their subject matter do their best within the boundaries imposed on them by the media.

The real art of astrology does not have much to do with these horoscope columns, however. The birth, or event chart, is what is important. This is a chart showing the positions of the Sun, Moon and planets at the time, date and place of birth as seen from the Earth, and it is what astrologers use for interpretation.

Astrology and its applications

There are probably about three eastern traditions – Chinese, Tibetan and Vedic (the astrology of India).  Many westerners are drawn to Vedic astrology.  While the roots are similar to those of western astrology, Vedic astrology is essentially spiritual.  We hope to be introducing an on-line Vedic course in 2020.

Arab diagram of eclipse is from Fotolia.